The Divadelní noviny (The Theatre Newspaper) Award for the 2017/18 season in the Musical Theatre category was awarded by the expert jury to Jiří Nekvasil for directing and Bruno Ferrandis for conducting the opera Thy Kingdom Come written by Alois Hába. This exceptional microtonal opera was produced in its world premiere on the 24th of June in Ostrava, paying homage to one of the most remarkable composers of the 20th century, Alois Hába (1893–1973). It became a flagship of the NODO / New Opera Days Ostrava 2018 festival, which is organised by the Ostrava Center for New Music in collaboration with the National Moravian-Silesian Theatre. “This combination allows us to create productions and projects within new opera and new musical theatre that are unique in the Czech context,” said Jiří Nekvasil in response to the award.

NODO has presented contemporary musical theatre in two-year intervals since 2012. The first Divadelní noviny Award relating to a NODO commission went to the creative team of Sezname, otevři se! – composer Martin Smolka and director Jiří Adámek. For the “Kingdom” by Hába, Jiří Nekvasil was joined by set designer David Bazika, costume designer Marta Roszkopfová, and choir-master Jurij Galatenko, who rehearsed with the soloists and choir. The demanding instrumental parts were performed by the members of the Ostrava Center for New Music’s international resident ensembles: the experienced Ostravská banda and ONO / Ostrava New Orchestra, a symphonic orchestra of young musicians whose successful debut took place at the Ostrava Days festival in 2017. For the premiere of the opera by Hába, a sixth-tone harmonium found itself at the helm of the orchestra – the 1930s instrument was constructed directly for Hába and plays a crucial role in Thy Kingdom Come. The Czech Museum of Music kindly lent out the instrument for the two performances at NODO (24th and 25th of June 2018), with pianist Miroslav Beinhauer performing the difficult part. The hundred performers (!) who took part in “Kingdom” only had five days of rehearsal at the Jiří Myron Theatre in Ostrava. The performance was recorded by Czech Radio.

Thy Kingdom Come was finished in 1942 and had to wait almost eighty years (!) for its first performance. There were many reasons for this: the complex political situation certainly played a part (as did the content of this “anthroposophic” opera), not to mention the unusual demands on production and performance. In the months preceding the premiere, these occupied the organisational and artistic team, headed by conductor Bruno Ferrandis, who spent several months working intensely on the unusual score. And with him Pavel Ciboch, who meticulously input Hába’s manuscript into computer software, thus creating the first ever copied parts.

In relation to the first performance of this sixth-tone opera, the media spoke of “a debt being paid to the most experimental Czech composer” (Jakub Kožíšek, ČT24) and the “climax of the opera season” (Radmila Hrdinová, Právo), and reactions such as “the international and surprisingly youthful festival audience in Ostrava was delighted by this work on (moderate) class struggle” (Boris Gruhl, Das Opernglas). Surprisingly, the impulse to present this extraordinary work by a composer whom the world knows better than his homeland came from below: Not from the safe facilities of the institutions caring for the legacy of Czech composers, but fromthe Ostrava Center for New Music, headed by Petr Kotík – an association with limited financial means. The idea was taken up by composer and director of the Czech Music Information Centre, Petr Bakla, and soon after also by the director of the National Moravian-Silesian Theatre, Jiří Nekvasil, as well the copyright heirs to the estate of Alois Hába, Jan and Dominik Andreska. NODO 2018 was also supported by a number of institutions including the Statutory City of Ostrava, the Ministry of Culture of the Czech Republic, Libor Winkler, the Moravian-Silesian Region, and the Art Mentor Lucerne foundation.

The Ostrava Center for New Music is currently preparing the complementary Ostrava Days festival, which will take place next year (22.–31. 8. 2019), and it is already clear that the programme will include sounds from the microtonal world of Alois Hába or Morton Feldmans opera Neither. 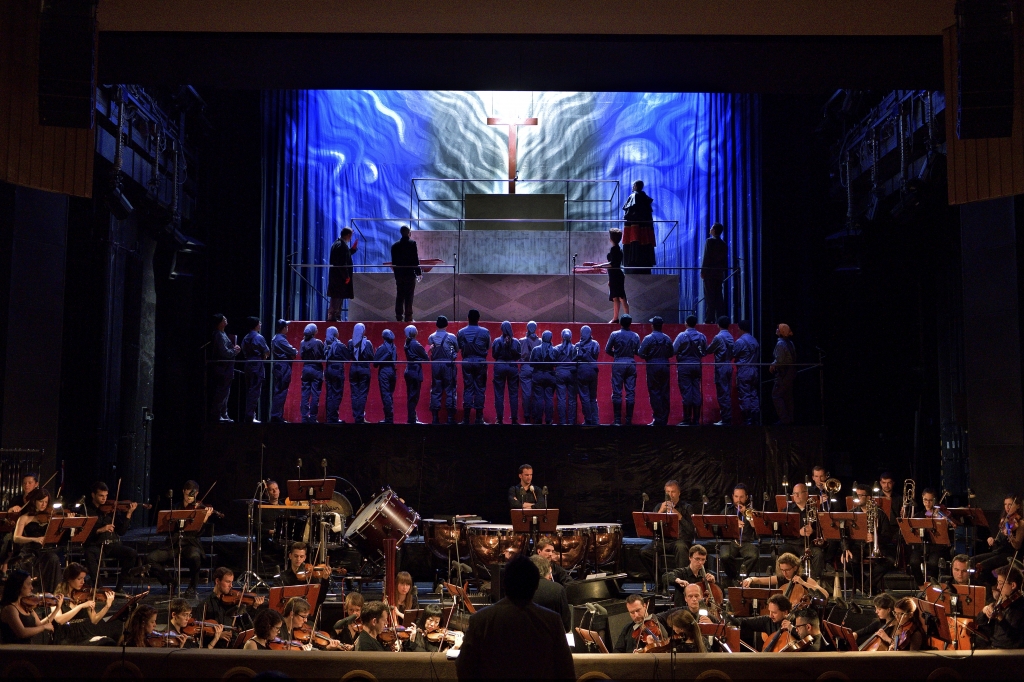