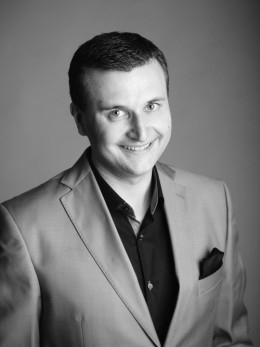 After graduating from the Prague Conservatoy, the tenor Josef Moravec studied at the Academy of Performing Arts in Prague and at the Sibelius Academy in Helsinki. He won thid prize in the Junior category and the Vilém Zítek Award at the Antonín Dvořák International Vocal Competition in Karlovy Vary. He has frequently appeared as a guest singer at the J. K. Tyl Theatre in Plzeň and at the South Bohemia Theatre in České Budějovice. Since the 2010/11 season, he has been a permanent guest at the National Moravian-Silesian Theatre in Ostrava (La traviata, Fedora, Cardillac, Orphée aux enfers, Polish blood, Eine Nacht in Venedig, Die Csárdásfürstin, Roméo et Juliette, The Bartered Bride, Armida, Nabucco, Anna Bolena, Mirandolina). He potrayed numerous roles at the Prague State Opera. His roles at the Prague National Theatre include the hockey player Petr Svoboda (Smolka: Nagano), Avenant (Glass: La Belle et la Bête) and Joe (La fanciulla del West), Remendado (Carmen), Alfredo (La traviata) and Vašek (The Bartered Bride). Since the 2014/15 season, he has been a soloist of the National Theatre Opera, he has also appeared as a guest at the Silesian Theatre in Opava, the F. X. Šalda Theatre in Liberec and the National Theatre in Brno. He has performed abroad too (Japan, Scandinavia, Algeria, Austria, Germany, Switzerland, Spain, France and Slovakia).